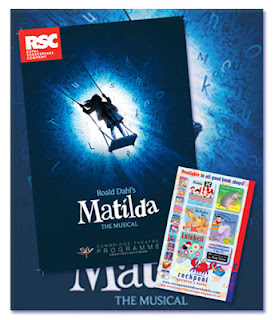 Rockpool Children’s Books
has placed an ad in the
Matilda programme, for July and August.
Matilda The Musical
was splashed across the headlines following
the prestigious Laurence Olivier Awards.
It won a record-breaking seven Oliviers,
The four Matildas jointly scooped the Best Actress in a Musical Award.
Writers by Dennis Kelly and Tim Minchin
were on hand to pick up the coveted
Best New Musical Award and
Matthew Warchus picked up the Best Director Award.
The other awards were Best Actor for Bertie Carvel,
Best Choreography for Peter Darling,
Best Set Design for Rob Howell and
Best Sound Design for Simon Baker.

Written by Roald Dahl,
it was published in 1988 by Jonathan Cape in London,
with illustrations by Quentin Blake
Matilda is the story of a wonderful little girl,
who happens to be a genius,
and her wonderful teacher against the worst parents ever,
and the worst school principal imaginable!

Posted by Rockpool Children's Books at 20:27