I'd like to take the opportunity to thank Gloria Bailey of the Publishers Association,
for her wonderful and usual attentiveness as I joined their collective
stand in Frankfurt this year.
It was a good and busy fair, and we saw many good friends
and aquaintances, and many new ones.
Lots of interest in Rockpool Children's Books titles and I'm
delighted to thank Frans Maree of Fantasi, a South African publisher
for taking Sam Walshaw's Maisey and the Pirates series at the fair.
They will be published in Afrikaans.
One of my main aims was to try and interest French publishers
in our list of French titles... 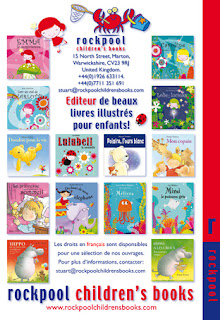 Posted by Rockpool Children's Books at 20:05 No comments: 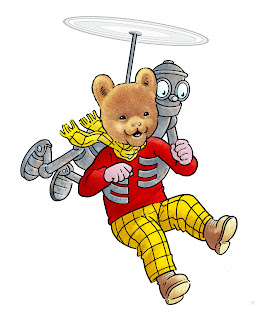 The new Rupert Annual is now out, and features on the cover Rupert and Robo!
The annual consists of four stories, Rupert and the Little Plane and Rupert and Ozzie,
by Alfred Bestall; Rupert and the Mail Train by John Harrold,
and finally, a new story, Rupert and Robo by Stuart Trotter.
It's been quite a year for Rupert activity, starting off with myself and Martin Crowther
from the Rupert Bear Museum in Canterbury
joining Bill and Sian on the couch of BBC Breakfast.
Seemed to go down ok. There was quite a media frenzy in the early part of the year,
with several radio interviews, then in July1st was interviewed by the marvelous
Mark Radcliffe at the BBC in Manchester.
His programme Rupert Bear and me, went out in October and excellent it was too. He also interviewed Rupert fans Terence Stamp and of course Terry Jones. 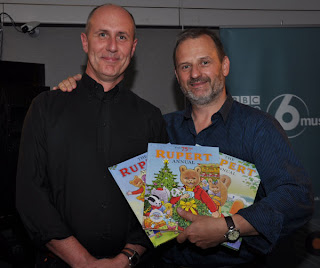 In August the Followers had their yearly AGM in Warwick,
which turned out to be a very busy day signing wise for me.
The Followers are looking for new members.
Posted by Rockpool Children's Books at 17:54 No comments: