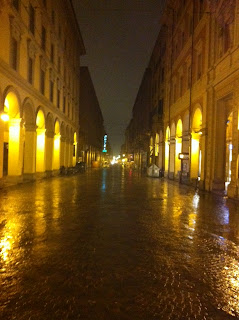 17 hours! 05.30 to 22.30!
Actually, no ones fault but the
very cold weather in
this part of Europe causing travel delays.
Arriving safe and sound was a miracle
following the third leg of my journey...
transfer by minibus, courtesy of Lufthansa,
from Milan to Bologna. Mad.

However, something positive did come out
of my long delay in Dusseldorf, I wrote,
at last, the sister, or rather brother, book to
'The Princess who couldn't sleep'. 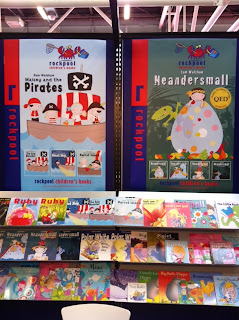 Bologna was a good fair despite not
preparing as much as I'd have liked
because of Rupert commitments.
Took several new titles which were well received.
The re done 'The Potty Book', 'The Little Bookworm',
'Parrot Island', the 'Neandersmall' series.
I'd like to thank Sam for all of her hard work for
Rockpool Children's Books pre Bologna
and for submitting all those years ago.
Her books look wonderful, and her
talents as an author and illustrator
are beginning to bear fruit as her titles, Maisey and the Pirates,
Neandersmall, and Little Fairies, sell worldwide.
Sam's distinctive style brings a quality feel to Rockpool's brand.
Long may our association remain.
Following Paul Simpson and Inkebooks hard work,
the ability to offer
our books in several formats digitally.
I was able to demonstrate this with Heather's
'Riding on an Elephant', showing the paper version,
epub3 on the iPad, epub on the iPad,
and versions in the Kindle app on the iPad
( I don't have a Kindle or Kindle HD ),
and on the iPhone Kindle app.
The files also work in B/W on the ordinary Kindle.

I'd like to thank Christiane Jansen and Daniele Doglioli,
our agents and our sub agents, Bella and Tony of CA Link in Beijing,
for their continued work on our behalf, and I look forward
to further success in China in the following months.

Spent some time with David Bennett, Boxer Books.
I always enjoy David's company and have done so since he first
commissioned me back in the late 80's as an illustrator.
David's boundless enthusiasm for publishing is infectious,
and his depth of knowledge of this industry
seems bottomless! It's his fault I'm doing this!